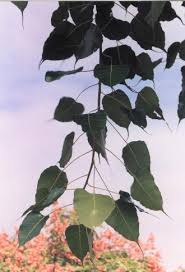 If you are interested in cultivating a bodhi tree, you may purchase one from local market, reproduce it by yourself, or contact one of the following chartible persons or organizations to acquire a sapling. Please feel free to reproduce your bodhi tree, share with everyone, and let us know. As of today, we only know people who give away bodhi tree for free in China, Taiwan, and Japan. Besides, in USA and Canada, there are individuals who may choose to reproduce bodhi tree in the future, while there is no confirmation yet. The rest of the bodhi trees listed below are in public facility and it may not be easy to acquire cuttings from them.
Available to The Public For Free

In 1989, Mr. Mao-Sen Li, then a government official of the WuXuan city, represented WuXuan to join the opening ceremony of the Plum Blossom Society in Beijing. During the trip, he learned about the branch of bodhi tree given to China by the Prime Minister of India in 1954. After numerous appeal and procedure, Mr. Li acquired a branch and started to mass reproduce it and give it away to the public for free.
Dr. Maeda, President of the Japan-India Education Society, was given the seeds of Sri Maha Bodhi as a gift during one trip in Sri Lanka. Mr. Yamazaki has bee reproducing bodhi trees raised from the seeds and give them away for free. The web site (in Japanese) has a lot of good experience sharing for reproducing bodhi tree.
Mr. Steven Thair found seedings from the bodhi tree in Bodhigaya in winter 2007. They became 15 seedlings, about 3 inches high, as of August 2008. He is willing to share it.
Other bodhi trees (not yet open to be reproduced to the general public)

The location where Buddha achieved enlightenment is in Bodhigaya. There is the Mahabodhi temple complex today. The original bodhi tree was destroyed during war. Luckily, in about 300BC, the bodhi tree was reproduced with cuttage and brought to Sri Lanka. In 1870 AD, it was planted back to Bodhigaya again. The tree is now a giant tree again, surrounding the Mahabodhi temple.
The bodhi tree was reproduced as Sri Maha Bodhi in Sri Lanka. It is 2500 years old and becomes the oldest tree recorded in human history.
At the entrance of Jetavanaana^thapin%d!asya^ra^ma, there is the Ananda Bodhi. The originally tree grew up from a seed which Ananda brought back from Bodhigaya. Before there were statues of Buddha, Buddhists have been using symbolic items such as the bodhi tree to memorize Buddha. The original tree was destroyed during war, and 120 years ago a monk carried a cutting from Sri Maha Bodhi. It becomes the current Ananda Bodhi.
It is the oldest bodhi tree in Thailand. It was originally a brach of the bodhi tree, and is now 1100 years old.
In the Foster Botanical Garden near Chinatown in Honolulu, there is a Bodhi tree planted in 1913. It is now also a giant tree.
There is also a bodhi tree next to the Queen Lili'uokalani Center for Student Services in the University of Hawaii Manoa campus. It was originally a cutting from the one in Foster Botanical Garden.
In 1954, the former Prime Minister of India visited China and gave a sapling of Sri Maha Bodhi as gift to China. It is still growing well in the greenhouse of the Botanical Garden of the Chinese Academy in Beijing.
In 1959, the former Prime Minister of India visited Vietnam and gave a bodhi tree sapling of bodhi tree to Tran Quoc Pagoda, which is the oldest temple in Vietnam with two thousand years of history.
In 1966, Venerable Bai-shen and Venerable Wu-Yi represented Taiwan to attend the Conference of World Sangha, and brought back a third generation bodhi tree. The tree was exhibited in Shandao Temple since August 5th of the year. We don't know the whereabouts of the tree now.
In Pa Auk Forest Monastery, a bodhi tree is close to the modern palace type of building used for abbot's accommodation and teaching. The bodhi tree was a gift from a senior monk in Sri Lanka.
In 1976, the main shrine of Nan Tian Zhu Temple is finished and the leading monk in Thailand visited to congratulate. He gave a bodhi tree as gift. However, when the former abbot passed away, the following abbot rebuilt the location where bodhi tree was planted as a parking garage. In the spring of 1978, Venerable Deng Ci found that the bodhi tree has regrew as a tiny sapling. He happily transplanted it, which is now a giant tree.
The temple now belongs to the Center of Buddhism Studies of Hong Kong University, which is led by Venerable Jing Yin.
In May 1989, Venerable Wipulasare, representing Sri Lanka Buddhism Society, escorted two saplings of bodhi tree as gift to Private Chih-Kwang Vocational High School of Business & Technology, the first high school founded by Buddhists in Taiwan. It is greatly received and planted in the school. When Hsuan-Chuang University was established, they are relocated to Hsuan-Chuang University, the first University founded by Buddhists in Taiwan.
In 1998, Sri Lanka National Government Culture Representative gave Zhanshen Temple Remain of Buddha and two saplings of bodhi tree.
In 2005, Venerable Pallegama Siriniwasa Thero and Congressman Sobhita escorted bodhi tree sapling to Taiwan as gift to Wu-Sheng Monastery.
There is a bodhi tree in the shrine of the Marpa Gompa Meditation Society. Mr. Dechen Namdrol received a cutting from it and grew it in his shrine as well.
H.E. Mr. Vichai Vannasin, the Thai Ambassador to India, brought the seedling from Buddha Gaya, the place where the Lord Buddha attained Enlightenment more than 2500 years ago, and gave it to Chulalongkorn University on January 22, 1996.
There's a cutting from the Sri Maha Bodhi in Staten Island Buddhist Vihara in New York, USA. It is about 4 feet in 2007, and in a pot indoors.
In 2005, a large group of Buddhists visited Sri Lanka to invite three bodhi tree saplings to Yuan Tong Temple.
The Buddhists in Yun Nan organized a group of more than a hundred Buddhists to invite three bodhi tree saplings from Sri Lanka. They are planted in the opening ceremony of the pagoda.
Queensland Art Gallery received a sapling of bodhi tree. They plan to hold the planting ceremony in the birthday of Buddha in 2007.
Mr. Kit McConnell is planting a bodhi tree that has descended from the Boudaiju/bodhi planted in LOS ANGELES HIGASHI HONGANJI BUDDHIST TEMPLE. Location of the bodhi tree is: ELEPHANT HILL, 3992 Drysdale Ave., Los Angeles, CA 90032 USA
Normal Bo Trees

You may refer to Dave's Garden or other related web sites.
[Back to The bodhi tree Network]